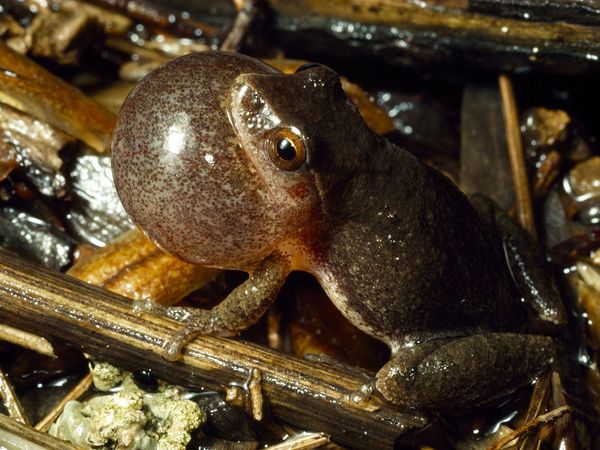 On a warm Monday evening this week we heard the first peep from the pond. This moment is a liberation of sorts, a marker of the winter losing its hold. We have been watching the fields begin to turn green; and we have felt the sun, now higher in the sky, warming the soil. But it is not until the first peeper begins calling that we trust that the season will turn. Then, last night, the amphibian chorus amplified, and the annual bacchanalia began. The chorus of the Pseudacris crucifer Beck’s great Grandma Todd called “hearin’ frogs.” Their life cycle involves the garrulous mating ritual that will erupt every evening over the next few weeks, a chorus my friend John describes well. “The burden of their refrain—maybe of most refrains—is Love! Now! Quick!” It is the males who are making the music, doing their best to attract a female and then head off into the water for a little amplexus.

From our little point in the world, our modest pond now loud with a froggy chorus, my brother’s extravagant migratory patterns are something to behold—a reminder 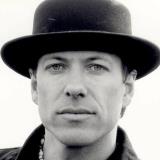 that time and space does shift and that there are many ponds out there beyond Water Run Farm. Mitchell is making music, too, but across the seasons, and attracting surely the males and the females of species spread far and wide. He has playing Jazz, Brazilian and African music around Los Angeles, including the artists Jessica Vautor, Natasha Agrama, Patrice Quinn, Laura Mace, Sandra Booker, Melissa Morgan, Carol Welsman, Katia Moraes, Jimmy Branley, Rene Camacho, Charles Ruggiero, Tim Lafebvre, Steve Hass, Ian Martin, Mike Shapiro, Dan Lutz, Tony Austin, Hussain Jiffry, Jose Marino, Peter Smith, Robert Kyle, Greg Poree, Randy Tico, Keith Jones, john Leftwich, Joey Heredia, Cafe Atlantico and Samba Society and more. He adds,  “I am proud to be part of and playing guitars on Waldemar Bastos recent release “Classics of my soul” The recording was produced by Derek Nakamoto and features the London Symphony Orchestra. Waldemar Bastos is a legendary singer from Angola often referred to as “the voice of Angola”

Mitchell also spent time this past year in a residency at the renowned jazz club, Clazz, in Tallin, Estonia. And he is  heading back out on tour (March 20-May 6) with the remarkable Melody Gardot after a run of promotion and touring with Melody throughout 2012. The venues he has played are legendary among musicians and lovers of music. The Melody Gardot Band even performed in a submarine factory in France. Here are some of the places he has been making his music this past year: L’Olympia, Paris, France; Maison de la Culture de Nevers et de la Nievre, Nevers, France; Cite De Congres, Nantes, France; Theatre du Casino Barriere, Lille, France; L’ Amphitheatre, Centre des Congress, Lyon France; Jazzablanca, Casablanca, Morocco; Mararad Fort, Manama, Bahrain; Lisebergshallen, Gothenburg, Sweden; Waterfront, Stockholm, Sweden; and the Konserthuset, Jonkoping, Sweden

You can learn more about Mitchell’s music and have a listen at his Web Site or check out his remarkable photographs on his Face Book page.