The 2014 Youth USA Ice Hockey National Championships are rolling to a close. Nathaniel’s U-18 team was over matched in Wayne, New Jersey, drawing a game against the defending champions from Virginia, getting spanked in a tough game against Illinois, and then rising a bit and holding their own in a final game against North Carolina. In the end, though, three strikes and you are out.

Ellinore, up in Buffalo, New York, skating on the defending national champion U-16 Shamrocks (15th in the 2013-14 USA Girls 16U Tier 2 Rankings) made a go of it. The team came out of pool play on Wednesday, Thursday and Friday seeded second (defeating Colorado and Amherst, New York). But then they came out with a loss in a close game against a tenacious team from Postdam, New York, losing 1-2 in the semi-finals. 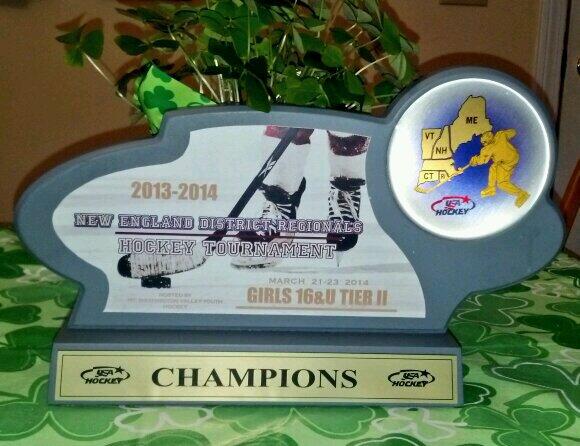 It was a solid season for the Vermont Shamrocks. They qualified for the National Championship by going undefeated in Regional Tournament. We were all set back a bit, however, when our dedicated and delightful coach Pat Burke did not make the trip for pool play because of health issues. But then Pat surprised and inspired the girls by showing up for the game against Colorado on Friday.

Mark watched Nathaniel’s game on Friday night. He then decided, with neither prudence nor wisdom, to embark on a semi-heroic early-morning drive from one corner of New York state to the other to watch Ellinore’s team in the semi-final game. It was good to be there, in the end, to watch our girl’s hockey season come to a close. Ellie is playing better hockey with every game, and is clearly enjoying every shift on the ice.

It has been quite a ride since those first ice skates appeared under the Christmas tree years ago: